In less than three hours, my life is about to change. In three hours I fly to the United States for my undergraduate studies at Carnegie-Mellon.

Perhaps surprisingly, I don’t feel any anxiety, or a sudden rush of nostalgia. I know that in a few weeks’ time, or maybe in a few months’, I will remember Singapore fondly; dinner, supper, and the daily family walk, interesting debates and discussions with close friends, and the feeling of being at home.

But right now I am excited. Really excited! I can’t wait to explore New York City and watch Wicked (composed by Carnegie-Mellon alumni Stephen Shwartz!), or see California, Texas, Indiana, and Pennsylvania. I guess when you’ve been in a country 600 kilometers squared your entire life, how could you not be excited about going to the third largest country in the world. The country with the highest GDP, where Google, Facebook, Apple, Microsoft were founded, where most popular movies, songs, television shows, and musicals come from.

Two weeks from now, I will begin my undergraduate education. When I received my admission decisions 4 months ago, I was really disappointed, because I was rejected from MIT and Stanford. True, Carnegie-Mellon was one of my top three university choices, and I received a pleasant surprise from Cornell, but I felt that I was going to miss out on many opportunities. Stanford and MIT have a much better ranked program than CMU in virtually every field outside of computer science and fine arts. They have better funding, facilities, student to faculty ratios, and the students who go there generally tend to be smarter.

After getting over my rejections, I had to choose whether I wanted to enroll at CMU, Cornell, or Berkeley. I spent many days thinking about what I wanted in a university education, researching about and comparing  universities, and talking to current students and professors at the three universities. Eventually, after many nights of intense analysis, I decided to enroll in Carnegie-Mellon, primarily because of the culture, the stronger computer science reputation, and (based on what I researched) the better student quality in math and CS.

On countless days after I made my decision, I would agonize over whether I had made the “right” choice. A friend would question why I chose CMU over Cornell, a better reputed ivy league university. Someone else would ask why I didn’t choose Berkeley, a university with a grad school reputation that rivals Harvard, Stanford, MIT, and Princeton in nearly every field. Many people I spoke to didn’t have a clue what Carnegie Mellon was. Initially, each of these statements caused me hours of pain, and occasionally I wondered if I could change my enrollment from CMU to Cornell.

Yes, I knew even then, that these feelings were often irrational. How does it matter what other people think, or whether they know Carnegie Mellon or not? I made the decision that I felt, and still feel, was the best for me. Besides, I think it doesn’t matter so much which university you go to (within a certain range, of course). Maybe I will change my mind a few months/years from now, but I think I would be fine in any of these 3 schools. Better to do things that interest me, and make the best use of my CMU education, than spend time paralyzed in fruitless analysis.

Thankfully, over the past few weeks, I have managed to exterminate these thoughts, and I am now eagerly anticipating the 17th of August. I started examining my various course options at CMU, and selecting the ones I like. Now, I couldn’t care less about being rejected from Stanford and MIT, and I don’t waste any of my time wondering whether Cornell or Berkeley would have been better college choices. Here’s my timetable for the coming semester: 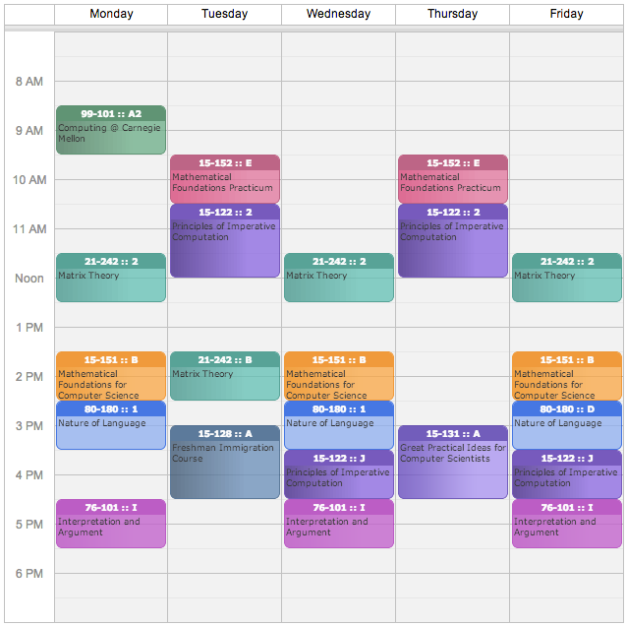 I  look forward to taking all of these classes. Matrix Theory is supposed to be a challenging ‘honors’ introduction to linear algebra. Principles of Imperative Programming is a 2nd course in computer science that covers basic data structures (lists, trees, heaps) and algorithms (sorting, searching, graphs) in C. Nature of Language is an introductory linguistics course. Interpretation and Argument is a compulsory first year writing course; I think the section that I chose, which explores the present state of university education in the US, is very fascinating. Mathematical foundations for computer science is a discrete math course. We have already started “work” on this course; our instructor has developed a Pokemon based game, with a map modeled after the Gates building in Carnegie-Mellon, where we have to go around solving interesting math and CS problems. 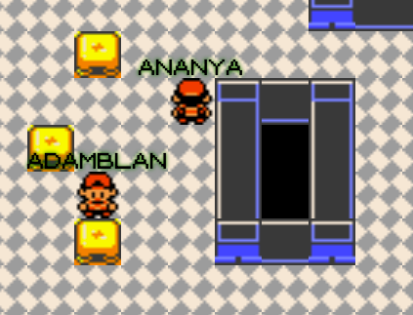 To my family, friends, mentors, and teachers, in Singapore: I will certainly miss you. I will not forget the time we spent together, the fun we had, or the moments when you helped me cope with my disappointments. I wish all of you the very best, and hope that we can keep in touch. I should be back in Singapore every 6 months or so, for the next few years of my studies, and hope to be back after!